Delfeayo Marsalis is one of the greatest jazz artists of our time! Don’t miss this special show direct from New Orleans with his incredible large ensemble.

DONATIONS DIRECT TO THE BAND

Delfeayo Marsalis (pronounced DEL-feo) is one of the top trombonists, composers and producers in jazz today. Known for his “technical excellence, inventive mind and frequent touches of humor…” (Leonard Feather, Los Angeles Times), he is “…one of the best, most imaginative and musical of the trombonists of his generation.” (Philip Elwood, San Francisco Examiner.) In January 2011, Delfeayo and the Marsalis family (father Ellis and brothers Branford, Wynton and Jason) earned the nation’s highest jazz honor – a National Endowment for the Arts Jazz Masters Award. Born in New Orleans on July 28, 1965, Marsalis was destined to a life in music.

“I remember my dad (Ellis Marsalis) playing piano at the house, and me laying underneath the piano as a child, listening to him play. After briefly trying bass and drums, in sixth grade I gravitated towards the trombone, which was an extension of my personality.”

Early influences included J.J. Johnson, Curtis Fuller, Al Grey, Tyree Glenn, Tommy Dorsey and Ellington’s trombone masters. Marsalis attended the New Orleans Center for Creative Arts high school, was classically trained at the Eastern Music Festival and Tanglewood Institute, and majored in both performance and audio production at Berklee College of Music. He earned a Masters degree in jazz performance at the University of Louisville and was conferred a doctorate by New England College. About the time that he first started playing trombone, Marsalis was already greatly interested in the recording process.

“Branford showed me how to create a feedback loop on a reel to reel machine and I was hooked! When I was in seventh grade, Wynton challenged me to create home recordings of him that had the same quality as trumpet virtuoso Maurice Andre’s classical studio recordings. It was all trial and error and I discovered a process and logic that I still use while recording today.”

Delfeayo recorded demo tapes for his brothers and schoolmates and served an internship at (pianist Allen Toussaint’s) Sea Saint Studio. From the age of 17 until the present, he has produced over 100 recordings for major artists including Harry Connick, Jr, Spike Lee, Terence Blanchard, the Preservation Hall Jazz Band and his father and brothers. Marsalis is an exceptional trombonist who has toured internationally with his own groups, as well as those led by five renowned bandleaders.

“Art Blakey taught me patience and purpose in soloing; Abdullah Ibrahim’s sense of harmony is prevalent in much of my music; Slide Hampton inspired me with his extraordinary command of the trombone and the language of jazz; and Max Roach played with conviction and dexterity all the time. Elvin Jones (who is featured on Delfeayo’s 2006 CD Minions Dominion) taught me about humanity, expressing myself through music, and most importantly, how to keep time.”

The lessons of these legendary artists can be heard throughout Delfeayo’s compositions and improvisations still today. As a composer and arranger, Delfeayo has always shown a flair for the dramatic. His debut CD Pontius Pilate’s Decision (1992) was inspired by biblical tales, and 2010’s stunning Sweet Thunder gives the Duke Ellington/Billy Strayhorn suite Such Sweet Thunder a modern day makeover. Rather than merely recreating the classic work, which is comprised of musical depictions of characters from William Shakespeare’s plays, Marsalis took the work as a point of departure for his octet, creating fresh and new music with inspired performances. Sweet Thunder earned a place on numerous top CDs of the year lists and wide critical acclaim including 4 stars in USA Today and 5 stars in the Financial Times. Marsalis also created an original theatrical jazz production, Sweet Thunder: Duke & Shak, which toured widely in 2011. He recently served as Music Producer for the upcoming film Bolden!, a mythical account of the life of Buddy Bolden, the first Cornet King of New Orleans. Among Delfeayo’s six CDs as a leader are the 1997 quintet date Musashi, which was praised by the All Music Guide for its “passionate originals… willingness to take chances and stretch himself and the result is consistently stirring post-bop music.” The Last Southern Gentlemen (2014) is his first album-length collaboration with his father, Ellis. Incorporating Delfeayo’s writings—including an essay on the sociological/historical themes that define the recording, commentary on the music, and original stories, children’s tales and poetry—The Last Southern Gentlemen saw New Orleans jazz royalty combine for an album of swinging playing and sociological heft. The CD earned rave reviews including 4.5 stars from Monarch Magazine. As Jennifer Odell writes in DownBeat, “Throughout the album, the performers prioritize warmth, tranquility and restraint while imbuing melodies and solos with the lyrical sentiments at the heart of the original music.” And Marc Myers of JazzWax writes, “Marsalis exhibits a beautiful tone throughout as he’s accompanied by his father and pianist Ellis Marsalis, bassist John Clayton and drummer Marvin “Smitty” Smith. A contemplative, embracing release from top to bottom.”

Marsalis has also been long involved in work as an educator. To inspire New Orleans youth through arts education, Delfeayo founded the Uptown Music Theatre in 2000 and has implemented its Kidstown After School in three New Orleans grammar schools. Delfeayo released Live at Jazz Fest 2011 with The Uptown Jazz Orchestra, and in 2014, he took the group to Africa to perform at the Standard Bank Joy of Jazz event. In addition, he has composed over 80 songs that help introduce kids to jazz through musical theatre and has reached over 5,000 students nationally with his Swinging with the Cool School soft introduction to jazz workshops. 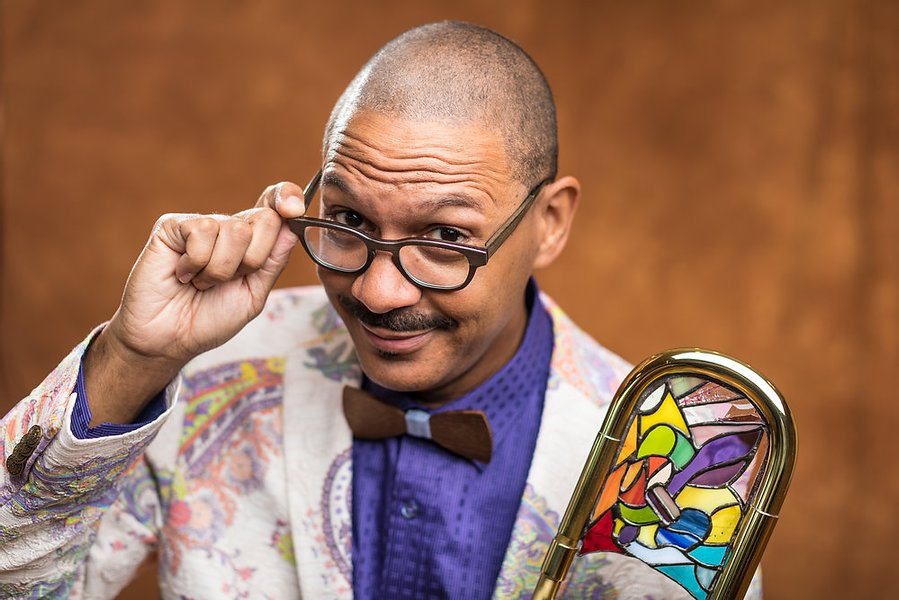